“With every Rolfing® session I discovered something new about my body and the world around me, my vision became wider… and so did my photography. I achieved an entirely new state of wellness. Rolfing® has changed my life. It resolved my back pain and gave me the ability to walk without pain.”  Says Andrea Sciré

I am speaking to Certified Advanced Rolfer® and Rolf Movement™ practitioner Marina Blandini and her client, Andrea Sciré (age 39), both based in Sicily, Italy.

An instructor, choreographer and passionate advocate of dance and movement, Marina qualified as a Rolfer in 2002. Practicing the Art of Movement for over 40 years, Marina has worked with The Duncan Conservatory of Prague, The Dance University of Rio de Janeiro and Salvador de Bahia, AFDAS in France and the Centro di Psicoterapia Transazionale Poiesis in Catania. She set up the Centro Studi L’Arte del Movimento in Sicily and her work as an artist in the field of choreography and video-making has been exhibited worldwide.

A web designer and branding expert, Andrea achieved international acclaim this year for his street photography when he was awarded gold in the PX3 2017 Competition in Paris, France, for his work “White Souls”.

What led you to try Rolfing?  I ask Andrea. 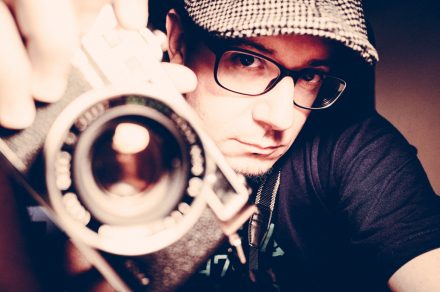 Five years ago, I was diagnosed with three hernias in my back.  These pressed against my spinal cord and caused huge pain in my legs and back. For two years, I was obliged to stay home in bed because it was difficult for me to walk and to leave the house.

While my job confines me to an office chair, my passion – street photography – requires me to walk for miles waiting for something to happen. Every street photography session became traumatic for me however because of the pain I experienced afterwards.

Everyday tasks became difficult and I turned to medication, cortisone and opium-based derivatives to stop the pain. These drugs created a strange condition in my mind. I was very chaotic and became a stranger in my life.

It was my neurosurgeon who first suggested Rolfing but one day, my boss mentioned Marina as we were publishing an interview with her in the magazine Sto Bene. I called Marina and started Rolfing.

Did you try other therapies prior to Rolfing?

I come from a family of doctors and so I tried traditional medicine first. Because one of the hernias was inside my spinal cord, my neurosurgeon advised against surgery; it was deemed too risky and could result in me being in a wheelchair.

Finally, a year ago, I had my hernias removed with a non-invasive vertebral treatment (NIVET). While the mechanical reason for my pain was removed, the spinal nerves connecting to my legs were damaged. My neurosurgeon recommends I continue Rolfing as it is the only way to help me stay well, to maintain my posture and prevent a new hernia developing.

Are you still being Rolfed®?

Yes. I do three Rolfing sessions with Marina every six months to maintain the results.

I recommended Andrea do also more Rolf Movement™, to work more on his coordination.  When Andrea first came to see me four years ago, it was obvious he had a brilliant mind but it was completely separate from his body. Andrea had no knowledge of his body, he never did any movement, and he never trained.  So we started creating that new relationship from the very beginning and then, once we were done with the first cycle of Rolfing, I told him to come every six months. There was one year when Andrea didn’t do any Rolfing and some pain returned. Then, once Andrea realized that in a few Rolfing sessions we could get over that, he started coming every six months.  We take it a little further every time.  At the beginning, the pain diminished and now it is literally gone.

With Rolfing Structural Integration, you can really change the tissue so that where it is contracted and limited, it can start moving again. With Rolf Movement™, you can really teach the person how to best use his body so that it works functionally with ease and no strain. This is important for someone with Andrea’s pathology as we had to totally reset his coordination. Rolf Movement™ works with perception and coordination, and in particular proprioception: the ability to perceive your own self.  We teach people to recognize the automatism that isn’t helping them, those bodily movements that are not consciously controlled, and to re-pattern the brain and nervous system to gain greater movement.

I was like a man with a head and body disconnected! I was incapable of doing simple tasks. Step by step, I was amazed by the results I achieved with Rolfing. I’m now happy every day. I look at the world in a different way and I am able to walk the streets for miles without feeling tired.  I’m more flexible and I can stand for hours without any back pain.

Andrea said Rolfing had expanded his view and his point of view means everything to him as a photographer!  You know, even the way you look at a screen can impact on a muscular or physical level. If you gaze on something very intensely, as a lot of web masters and photographers do, you somehow make a triangle with gravity. Your centre of gravity moves forward and that can put you out of balance.

Did the Rolfing® resolve things immediately?

Each session gives me a new state of wellness. My body is aligned, I sit and get up with greater ease and I can prevent the onset of pain. I have gained greater serenity.

We got immense results in the very first session. I asked Andrea one question, ‘What work do you do?’ When he said he was a web master, I said ‘Aha! You are sitting 12-16 hours a day, immobile in front of your computer, right?’ I asked him to show me how he sat and, of course, his sitting posture was heavily compressing his back and he was pressing between the vertebrae. Just teaching Andrea how to sit got immediate results. I think that was when a big window opened in Andrea’s mind, that something is possible.

Did Rolfing surprise you in any way?

Rolfing surprises me all the time, after every session I’m more in contact with the ground and I can feel gravity helping me.  It now feels like the ground is pushing my feet up!

Since you completed the Rolfing Ten Series, has your approach to life changed in any way?

I have learnt the correct way to sit down, to get up from my desk … I have changed my actions. I also do an exercise where I walk around on all fours as this helps me stay well the rest of the day.

Importantly for me, my vision is wider. I have learned to pull my head back so that my posture is more aligned and centered.

The ‘walking like a dog’, or ‘four legs’ exercise immediately shows where the main curves of the spine go, if they are correctly aligned or not. We have three physiological curves that are extremely important: the Lumbar curve, the Thoracic curve and the Cervical curve. They have to be in the correct position and if they are not, all the connections go. By putting a person in a four-legged position you achieve this immediately, you can make them perceive what they are doing correctly or incorrectly, and you can suggest how best to move in a more functional way. When the client then gets up, the difference in their normal walking is astonishing. You can re-pattern the brain to achieve the contralateral movement that you do in regular walking with a correct back posture. If the main curves are in place, the walking on four legs is much wider, easier and effortless.

When Andrea first came to me, he was lying back in front of his computer and the Lumbar curve was gone. There was a big curve between the sacrum and the head, and when Andrea walked, he walked with this curve. The sacrum or his ‘tail’ if you like, was between the legs. I like to use the image of the happy dog pictured with its tail up and wagging.  When Andrea walked, he was somehow holding his sacrum a little in between the legs and the resulting motion was shorter and more difficult. By opening the relationship with the three main curves of the back, Andrea could release that position and walk much more easily.  The articulations opened up and demanded less effort.  Movement became more dynamic and lighter.

I recommend Andrea does the four legs exercise for just a minute a day.

The four legs exercise is akin to a ‘reset button’ to correct posture?  I ask Marina.

Exactly. It is like putting you back to when you learn to crawl. Crawling is when the side-to-side movement brings structure into the brain, when children establish their contralateral movement. Most people who walk with their tail between their legs don’t move their arms, they just use their legs. They don’t use the spine, the torqueing of the spine, or the release of the spine, to help propel movement.

They say the average person walks around 10,000 steps a day. If your leg weighs 10kgs, then you are lifting 10,000kgs a day, either effortlessly or with enormous effort. That’s huge!  If the motor coordination is correct and your body is correctly centred then most of this work happens thanks to gravity, inertia and a law of physics that seems to move all by itself. That’s fantastic isn’t it!