Rolfing after a hip operation

“For me, the results of Rolfing® were immediate. I wanted to get out of this vicious cycle of pain and Henrike said something that made a big impression on me: Henrike said ‘Don’t think about how you are walking. Stay in your head and look around you. Try to avoid thinking about your legs!’  Before, I was always thinking about how I walked, asking myself, ‘am I doing it right?’ or ‘will that make the pain worse?’ Now, Henrike’s words accompany me everywhere, I do what she said and I just feel so much more optimistic!”

I am speaking to Munich-based Certified Rolfer®, Henrike Rietz-Leiber and her client, Christa Werner, a pharmacist, who turned to Henrike for Rolfing after suffering chronic pain in both her back and right leg following a hip operation in March 2014.

“I was essentially telling Christa not to focus too much on the pain. For Christa to trust her legs, to find the ground, and to really feel the space… When I saw her for the first time, it was really apparent she needed more resilience. There was also this block, a block thatprevented her from seeing the ground and seeing the space. The head was too heavy for Christa to carry.” Explains Henrike.

What made you try Rolfing? I ask Christa.

My family doctor recommended Rolfing because of the problems I was experiencing with my back, my right thigh and knee. She gave me a prescription for ten sessions. I found Henrike on the Internet and she has a Rolfing practice in Haidhausen close to where I live.

I started Rolfing in February and finished in June. We did it fairly consistently, nearly every week. I felt so much better afterwards. It was worth it!

What was the problem?

I had an operation on my right hip in March 2014.  At the same time, I got a new mattress and, I know this sounds curious… but after the hip operation, I experienced the first big problems with my back. It was like it was ossified. I couldn’t stand at the counter of my pharmacy for more than two hours without a break. All this happened the same year that I closed my pharmacy and so I didn’t really look after it.

Did you try other therapies before Rolfing?

I had some physiotherapy but the benefits of that lasted only some hours. It was always the same, the back pain would return. The year after, I started to get pain in my right knee and also cramping in my right thigh. I did gymnastics and the doctor recommended back rolls and yoga rolls but that didn’t work. Nothing worked. Then, I consulted a Chiropractor, a friend of mine, and it was the same thing, no success. I carried on with physiotherapy and massage until I saw Henrike.

Was the pain in your right leg a consequence of overcompensating after the hip surgery?

After my hip operation, my doctor recommended I put a wedge under my left heel – a special sole inserted in the heel of my shoe. I did this and after we had completed the Rolfing, my right side was fine and I had no more pain. However, my left side then started to hurt a bit. The one centimetre wedge became too much and so I have had it shortened to just half a centimetre and I hope that this will now be better. However, since I finished Rolfing, my right side is okay and my back is wonderful. I have free movement again and it is heaven! I am going to make an appointment on my return from holiday to do some further work with Henrike on my left leg.

Going through the Ten Series I encouraged Christa to really listen to herself, to her body, and to adapt and decrease the depth of the heel if it became too much. Obviously, I cannot change actual bones. The thing is the way you approach it. You see, sometimes the body can really compensate and this is not a problem for the body, however Christa’s body really wasn’t able to.  So you have to try different things out. Building up Christa’s resilience was the most important thing to me, as well as helping her achieve greater ease and freedom of movement.

I remember her coming for her second treatment and her face was just beaming. She said it was her first week without experiencing pain. The pain was still there but significantly less than before. Also I see from my notes, as Christa hasn’t specifically mentioned it, that when she came to me for the second session, Christa also reported feeling no more pain on the scar on her right side resulting from her breast cancer surgery. Christa hadn’t actually told me about this pain before but I opened up the right side where she had had the surgery, and she told me the pain had now gone.

Isn’t it strange how we can forget pain that was once so dominant in our life?

Yes, it was just wonderful when Henrike released the tension around my arm and right breast. I had free movement at last, no more pain.  It was great!

I think it is normal that the body blocks out negative things.  It’s best to get them out of the mind!

Yes that is often the case. After Session 8 for example, I noticed Christa could bend over to pick something off the floor, something she couldn’t do before. She forgot to mention that to me. I do think that it is a really good thing that clients forget pain!

Did Rolfing surprise you in any way?

Yes! I sing in a choir and after Session 7, my singing teacher pointed out that that my voice was particularly good that day. Henrike had treated my head, neck and shoulders during that session and so that was very surprising and exciting!

It surprised me also how much more optimistic I became during the Ten Series. I have a totally new attitude to my life and I feel I can really seize the day.  I have more power to achieve a day and so many more ideas about the future. Looking back, I realise I was rather depressed. There I was, 66 years old, and I couldn’t move anymore, and needing to rest all the time.

I want a good life. I want to use my day. That is very important to me and before I had no idea how to go on with this really depressing situation. When you are focusing so much on the pain in your body, you really can’t look outside.

Were the Rolfing sessions challenging in any way?

Yes, there was one session working on my left hip! Henrike found one particularly angry muscle! There was also one session working on my feet (Session Two). The left one is damaged from when I slipped a disc twenty years ago and the toes are slightly numb. Henrike brought so much life into my left foot that it was a bit unnerving. Yet when I went out of her door, I felt like I was walking on clouds. Really great!

Some people report Rolfing working for them in between the actual physical sessions. Did you find that to be the case?

Yes. I was always conscious of what Henrike told me. After Henrike relaxed the area around my chest, I found I could stand longer and straighter at the counter in the pharmacy. I found myself adjusting my posture automatically.

Do you have any other observations about treating Christa? I ask Henrike. 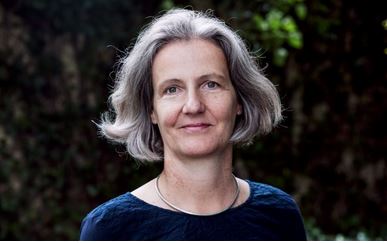 Yes, after Session 6, Christa said she felt free in the back and she could swing her arms. It was very important to get her arms up.

Christa was just so glad, so happy during and after all our sessions. I can really remember her face after Session 10.  Christa said ‘Wow! I am just so happy with my body’ and she really was in her body. When she first came to me, Christa was there but her body was something different. Now, Christa was swinging her arms, really moving her body, almost dancing in my room.

Most importantly, Christa also said, ‘if I do have a pain, now I know how to get out of it’. It was just so wonderful to see her really smiling and to see so much life in her face.

For more information on Henrike Rietz-Leiber