For many years, it has always been a special pleasure for me to work with musicians. As a member of a vocal ensemble, my professional interest in the specific challenges of the musical profession is combined with my personal joy in making music. Together with my wife, Bettina Löns (PT and dancer) we have conducted many workshops for professional singers.

The amazing thing for me is how many ‘parallels’ music and Rolfing®have.

An example is perhaps the connection between sound and ‘inner space’ for singers: Too much tension (fascial and/or muscular) in the neck area narrows this ‘resonance space’ and influences the sound. As Rolfers®, we strive to regulate tensions and expand spaces. Peter Melchior described the connection between SI and artistic work during my training as follows: ‘We Rolfers® are artisans on the living body’.

Often, actually always, the musicians can hear the ‘sound of Rolfing®’. In my opinion, the structural and functional changes can help to improve musical expression.

Even if these differences were not only noticeable in singers, I would like to limit my experiences with this group of musicians as an example.

For singers, the question always arises as to how the body is used as an instrument. The actual resonance space to produce sound seems to be relatively limited. Essentially, therefore, head, visceral part of the neck and cervical region, as well as the upper chest cavity. As a Rolfer, one could therefore assume that in this case topics from the 7th session are in the foreground.

Over the years, however, it has become clear that it is particularly important to consider the structural and functional relationships of the entire organism in such a specific work. For this purpose, the Ten Series by Dr. Ida Rolf proves to be particularly helpful as an orientation and the learning of structural and functional relationships for the singers.

Nevertheless, I would like to point out some interesting anatomical relationships that deserve special attention -

The example is actually a transition to the functional relationships, which I would like to briefly discuss.

In summary, it can be said that increased stress changes in the described myofascial structures reduce the available resonance space. This influences the timbre and sonority produced mainly by the generation of overtones. Ultimately, the possibilities of musical expression are limited.

Here it becomes clear that at the level of coordination of the local physical structures involved, of course, the entire body is involved. The overarching question of what prevents the voice from unfolding its inherent possibilities comes to the fore.

We can consider the resulting coordinative structures from different perspectives:

For the singers, of course, this plays a particularly important role. What does ‘my’ interpretation sound like, for example? The perceptive structure – to use the terms used in Rolfing – is involved in different ways.

In conclusion, one can perhaps say that the feeling for one's own musical expression improves as a result. It complements vocal abilities and can possibly lead to more pleasure in personal exploration of new possibilities and replace old less useful concepts about the design of one's own singing (body image).

As a Rolfer I use the term psychobiological structure (meaninge) – or in other words – everything makes sense!

For working with musicians, it is particularly important to formulate a goal together that seems realistic in the context of a series of Ten Series.

This also means that the musicians develop an extended repertoire of possibilities to check the effects. In concrete terms, this often means that physical relationships such as the interaction of voice and myofascial tensions can be experienced individually.

Within this framework, repetitive - in a broader sense standardised - procedures are therefore important to check progress. This means that new possibilities can be better integrated.

An example: The preparation of a vocal phrase is closely related to the execution of the inhaled movement. Activities in the shoulder girdle and/or jaw area are not very helpful. This would be visible in body reading. The so-called pre-movement would be the indicator of this activity here. Reasons can be a lack of ‘support’ from the lower limb, less coordinated and flexible connection from ‘above and below’ through the pelvis, etc. The voice and its different sound variants can be indicators for the singers to feel these individual connections. At this point, it becomes clear that during a series of treatments, repeated functional work in gravity is of great importance. Singing or playing the instrument within a treatment is often very helpful for the implementation and integration of structural changes. 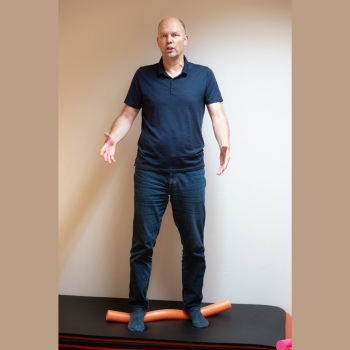 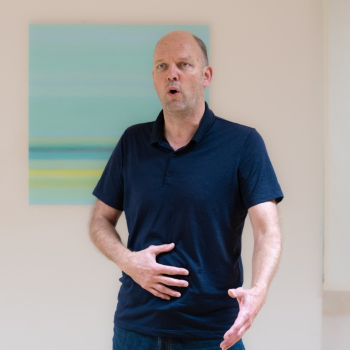 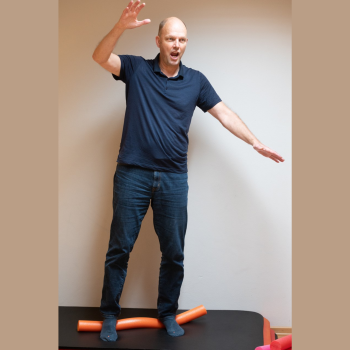